The idea of trading stocks, for many people, triggers a porcupine-like reaction. It’s too complicated, too expensive, and the platforms that allow you do it feel straight out of the early 2000s.

That’s why Robinhood has had such success. Since launching in 2015, the millennial-friendly investing app has accumulated more users than E-Trade and is valued at nearly $6 billion. Where its competitors charge trading fees, Robinhood charges nothing for trades and a key part of its success lies in its clean, easy-to-use interface, which has been recognized in its own right; in 2015, Robinhood became the first financial services company to win an Apple Design Award.

Alex Bond, 29, is the senior product designer at the Silicon Valley-based startup. After studying fine arts and graphic design at Colorado State University, she went on to hold several design jobs before spending two years at Pinterest. From there, venture capital firm Sequoia Capital brought her on as the firm’s 2016 Design Fellow, where she worked with portfolio companies to help them solve business problems through design.

Today, she’s leading part of Robinhood’s team of designers as the company continues to improve its product. In the interview, she explains the strategies and tactics she uses to make trading more approachable.

Was becoming a designer in the financial services world something you aspired to do?

Not at all.Like many people at the company, I don’t have a financial background. I remember when Robinhood initially reached out to me I was like, “What is this, a bank? I don’t know about this.” And then I spoke with (co-founder) Baiju Bhatt and he explained the product and it kind of blew me away. I felt that this was generally a worthwhile thing to work on.

What’s the design strategy at Robinhood?

In the modern era, it’s not really different. When you look at the traditional financial brokerage account, there’s a lot being communicated there that isn’t in writing. Whether it’s the landing page or the product itself, the design can feel very alienating to customers. I don’t know if it’s intentional or not, but it serves a purpose: it’s obtuse, difficult to parse, and, as a user, it can make you feel like trading is not for you or maybe those fees you’re paying are really worth it because this all feels really complicated. I think there’s a lot of muddying the water to make it seem deep.

At Robinhood, we’re conscious that design, beyond the words, communicates who a product is for. We’re focused on design that’s friendly, that’s inviting, that doesn’t intimidate you, that isn’t condescending.

We make use of simple colors to remove as much information as possible, so that it’s clear to the user what’s happening. 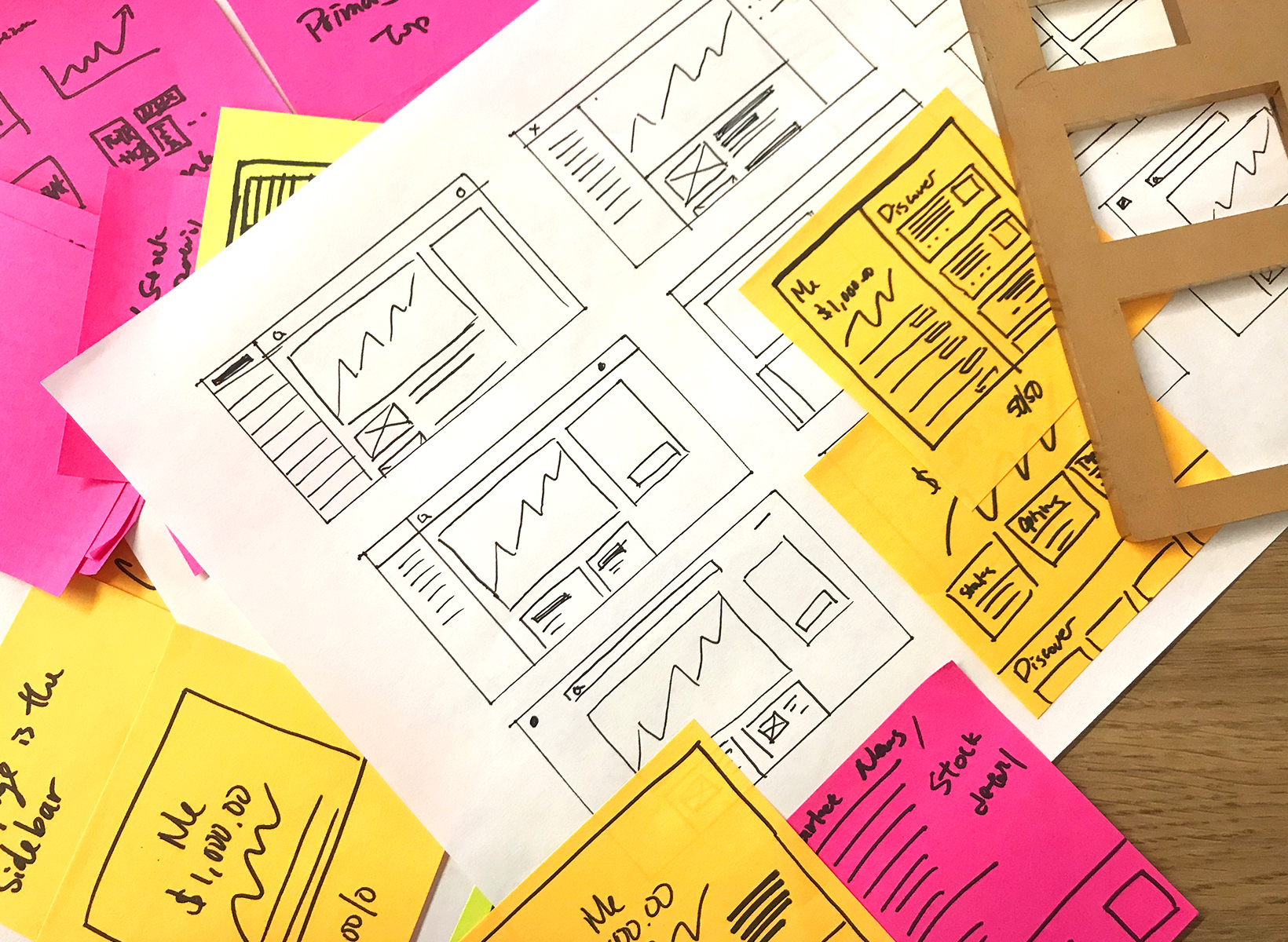 Robinhood’s main color aesthetic is bright jungle green. That’s not a color we typically associate with financial services. Tell us about the thinking behind this design choice.

Traditionally in the stock market, green means up and red means down. That’s a really quick visual cue, but in the wrong application, it can feel intimidating and clinical. Rather than just your typical primary green, we wanted ours to be a little bit more vibrant. I think that it speaks to a younger generation.

We make use of simple colors to remove as much information as possible, so that it’s clear to the user what’s happening. For example, we have day and night mode in the app that reflects when the markets are open and closed. Overall, we try to remove as much decoration as possible and use color as a way of communicating what’s happening in the moment.

In our work, we’re referencing Swiss design from the middle of the century. We’re getting back to basics and rethinking features through the lens of patterns that make sense to a contemporary audience. 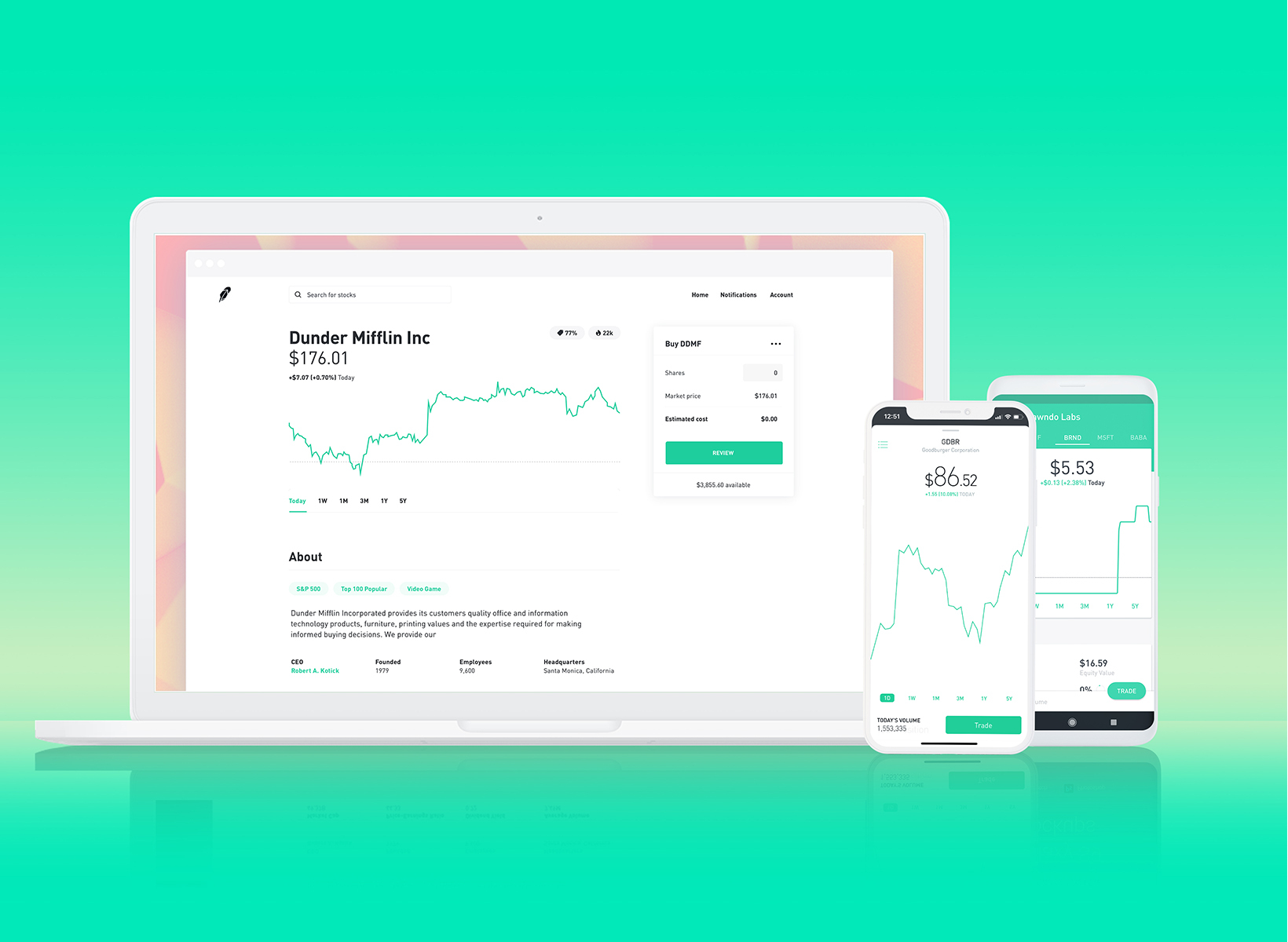 Robinhood’s minimalist interfaces use color to convey what is happening in the market.

The heart of all design questions is: “What problem is this trying to solve?”

How do you know what users want?

I’ve been at companies where research can feel like they’re a second-fiddle team and a lot of decisions by leadership are based on educated hunches. At Robinhood, our roadmap is almost entirely influenced by our research team. As we start solving problems, they’ve already done foundational research on users, on possible products. They’ve already started thinking ahead for us. And they partner with us to work on these projects. When you have facts and information, it makes decision-making easier.

What are the questions you ask yourself as you’re designing?

The heart of all design questions is: “What problem is this trying to solve?” It’s something you can always go back to and, at any given moment, it can help you find the right solution. There are so many ways to make something look appealing, to make decisions about hierarchy, layout, type, color. For example, there is no reason we can’t have a technicolor app. But the fact is, the problem we’re trying to solve at Robinhood is clarity. We need to be clear and friendly and relatable. That is the lens through which we’re able to make design decisions. It’s what lets us rule out things that, while nice, don’t solve the specific problem.

99u, Alexandre ANZO, News
Newer Post The First Five Years: Should I Try to Negotiate the Salary of My First Job? Older Post Be Frugal with Everything Except Your Bed, Your Chair, Your Space, and Your Team